Hydraulic tappets – causes and consequences of the damage 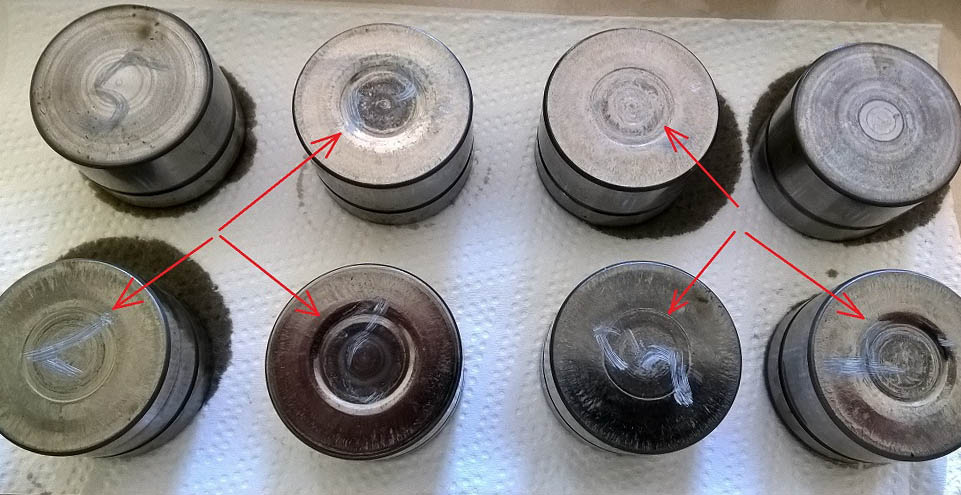 If there is an excessive wear on the hydraulic tappets, it means that the hydraulic system components do not work as they should. All power transmission components must be working in perfect synchronicity and under optimal working conditions. If any of the components are not working properly, a defect may occur on the component itself and also on another – in a related system. Damage to a particular part does not mean that this part is defective, but that the whole system is not working properly for some reason.

Signs of damage of the hydraulic tappets

There are signs of damage in the photos. These, however, are not related to the material of the tappets but to the poor running of the components.

The tappets have been damaged by increased mechanical pressure or due to insufficient lubrication. The tappet is then strongly compressed between the lobe of the camshaft and the valve. This is evident on the plunger piston, where there is noticeable excessive pressure from the valve. At the same time, there are signs of extreme pressure on the tappet on its upper surface, where the cam’s lobe acts on it. The surface of the Unit Injector System (UIS) tappets is specially modified to withstand long-term stress. If the pressure is disproportionately high, the oil film on the surface of the tappets is unable to withstand this excessive mechanical stress. Mixed friction and lack of oil film will cause damage. If the tappets work in such an inappropriate working environment, there is a very high probability that other components of the entire mechanism will be damaged.

Signs of damage on the camshaft.

The photos are showing noticeable wear on the cam.

The cam is also damaged on the opposite side of its working surface – which is the lobe of the cam. This side of the shaft shouldn’t normally put a significant pressure on the tappet, as it is an inactive phase in the rotation of the cam. At this stage, the cam should only slide freely on the oil film of the surface of the tappet (before it reaches its working stage again). There is obvious wear on this part of the cam due to the strong friction of the cam components with the tappet instead of the free sliding of the oil film. If there is also insufficient lubrication, the problem will appear even earlier. The same wear can be seen on other lobes of the cam (on the non-working parts).

Tappet and cam wear are the result of another problem. These are not defective components, but indication of the other defects. The hydraulic system can operate without error only under the optimal conditions. To do this, it is always necessary to change all the components that are related to the cam – ideally in the complete kits that solve this problem. It is also necessary to ensure proper lubrication of all components. We always recommend that you do repairs according to the vehicle manufacturer’s manual.

Other possible causes of defects:

Using some of the old parts (original parts) when replacing some components causes repeated problems. It removes damaged parts and replaces them with new ones, but the cause persists (e.g. replacing damaged tappets, but leaving the original cam with damaged lobes). The defect will soon emerge and it is basically a waste of money. Therefore, it is always advisable to change all components that work together within a single system. In this case, complete kits of cams.